The Unsupported Dome, And How It transformed Architecture

The Treasury Of Atreus, Mycenae

During the second millennium BC Mycenae was a strong city state; it had a sophisticated culture and the Mycenaeans were so influential that the period of Greek civilisation between about 1750 and 1050 BC was named after them. One of the monuments from the city that still survives to this day is The Treasury of Atreus, sometimes known as the tomb of Agamemnon. in truth it probably has nothing at all to do with either Atreus or Agamemnon; the name was given to it by Heinrich Schliemann, who was obsessed by the Trojan War, and like many of his other claims this has been subjected to a great deal of debate.

At nearly 50 metres in width it was probably the biggest in the world for more than a thoudand years, until surpassed by the 1st Century BC Temple of Mercury, one of the original pagan temples of Rome.

The Treasury of Atreus was very unlikely to have been a Treasury at all; it was almost certainly a tomb built for a very important and powerful king. It was not only situated in what was then a highly prominent location but it was richly decorated; sadly however just who this king was is information that has been long lost.

The tomb was built by sinking a large shaft and building substantial walls; in fact the lintel over the entrance is a stone weighing approximately 120 tonnes, which is still possibly the heaviest or lintel in the world. an open triangular section was created to throw the weight of the very heavy stonework above the lintel away from the centre of it. The dome was formed by laying tiers of dressed stone with each layer placed a little more towards the centre than the one below; a system known as corbelling. The excavated earth was then backfilled to eliminate the possibility of the weight of the dome causing the structure to bulge outwards.

During the 19th century, at a time when archaeologists from certain countries felt they were entitled to desecrate monuments that had survived for thousands of years, decorative items from the tomb were removed and some can now be seen at the British Museum in London. 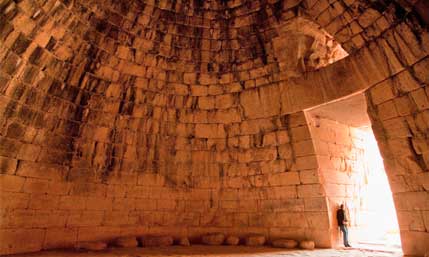